This has been and is going to continue to be a reoccurring theme! As we explore the solar system, Planetary scientists who believe in evolution are going to have to come up with new speculation on why the data is not confirming billions of years. Here is a prediction, when New Horizons passes by its next object in deep space, it too is going to discover youthful features that will surprise scientists much like Pluto did, much like other planets and moons did in our solar system.

So what is the new data which defies 4.5 billion years? Here take a look at this picture… 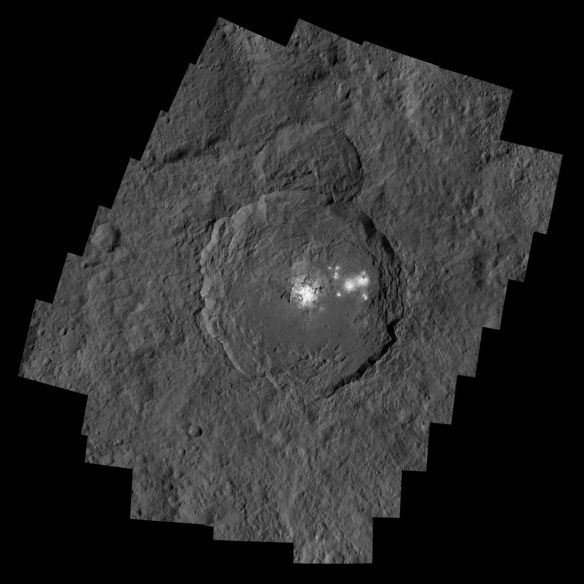 You noticed bright spots on the surface. These bright spots on Ceres have stunned planetary scientists because of their implications. The bright spots as you see here are epsom salts which came from water-ice. Occator is the name of the crater where we see here the epsom salts. Planetary Scientists believe this crater is 80 million years old, however, the bright spots they say in their own words, “should not have lasted nearly that long.”  They are quite right, because you have a dwarf planet with no atmosphere, and over millions or even billions of years would have long gone. Water evaporates very rapidly with no atmosphere and what they say would be left is…“magnesium sulphate spots.” So if Ceres was that old, we wouldn’t be seeing what we are seeing today! But if Ceres is younger then what they say, these features are a confirmation rather than a data conflict! There is no doubt, the evidence suggests that Ceres is younger than its assumed old age.

Since this conflicts with planetary evolution, evolutionary scientists have to work on their story on how the impossible just happened before their eyes and then fit that back into their belief system. This is why it takes more faith to believe in evolution than it does believing in God!  I love space exploration, I hope to see a lot more, these discoveries are very exciting and also a confirmation of creationism.